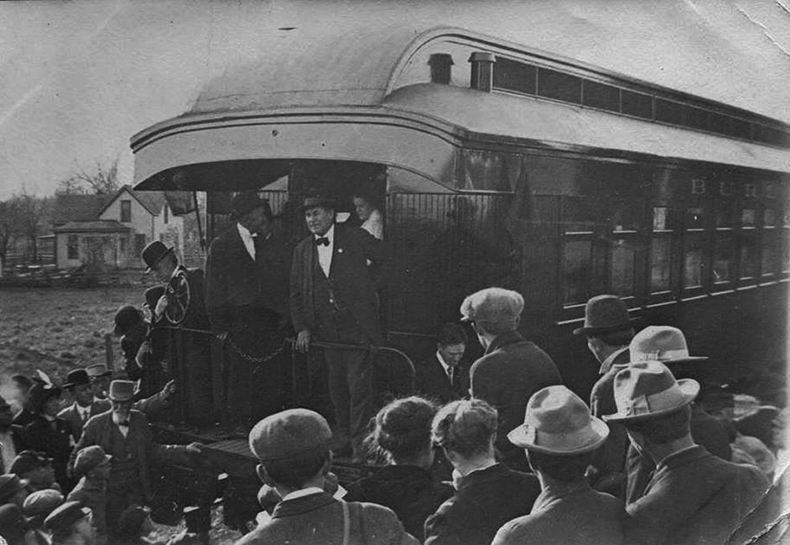 William Jennings Bryan (1860-1925) was born in Illinois in 1860. His father, Silas L. Bryan, was a prominent and respected lawyer, who represented his district for eight years in the Illinois State Senate.

From his earliest years he had a fancy for public speaking, which developed his oratorical powers. In 1880, he won second prize as the representative of Illinois College in the State collegiate oratorical contest. He was valedictorian of his college class and came within one vote of being elected to the same position in the Law School. From 1880 on, he spoke in political campaigns.

In 1887, he was persuaded to move to Lincoln, Nebraska and enter law practice with A.R. Talbot. In Nebraska, he immediately became active with the activities of the Democratic Party and was a delegate to the state Democratic convention in 1888. He was elected to Congress, serving from 1891 to 1895, having failed in his bid for a Senate seat in 1894.

During this period, Bryan was a leader of the silver coinage forces, and it was at the Democratic National Convention in 1896 when he made his famous “Cross of Gold” speech. It is considered to be the most famous speech in American political history. The issue was whether to endorse the free coinage of silver at a ratio of silver to gold of sixteen to one. His dramatic speaking style and rhetoric roused the crowd to a frenzy. Men and women screamed and waved their hats and canes.

Supported by the rising Populist Party, the “Boy Orator of the Platte” began his campaign for the presidency. Bryan decided the best strategy for Democratic victory was to bring his message directly to the people by speaking around the country, often from the backs of railroad cars. This was a new tactic, since presidential candidates traditionally stayed home and let others speak on their behalf. It won Bryan both criticism and fame. Bryan would run for the presidency three times, losing in all three campaigns.

Despite these set-backs, Bryan remained a leader of the Democratic party and in 1912 led a movement to name Woodrow Wilson to be the Democratic candidate. Upon his election, Wilson made Bryan his Secretary of State. In this capacity Bryan campaigned for peace, negotiating treaties with thirty other nations. When he saw that the United States was about to enter World War I, he resigned his post.

William Jennings Bryan was considered to be a true humanitarian with deep religious convictions and a dedicated advocate of temperance. He always championed the common people. He was an editor, establishing the newspaper The Commoner at Lincoln and an author.

In 1925, Bryan faced off in the courtroom against Clarence Darrow in the famous “Scopes Trial”. The trial tested whether evolution could be taught in schools, and Bryan represented the views of creationists who supported a literal interpretation of the Biblical creation story. Though Bryan won, the conviction of John Scopes–a Tennessee teacher who had purposely broken the law–was later overturned. Bryan died a week after the trial, still a controversial figure, but now seen as a religious conservative rather than an economic radical.

Bryan’s historic residence “Fairview” has been restored to its early 1900s grandeur. The house that once sat atop a hill and offered a “fair view” of the prairie capitol and its adjacent farms has been incorporated into the Bryan LGH Medical Center West campus and is located about one block east of 48th Street on the north side of Sumner Street in Lincoln. The Bryan Museum, on the lower level, includes authentic displays and recordings.