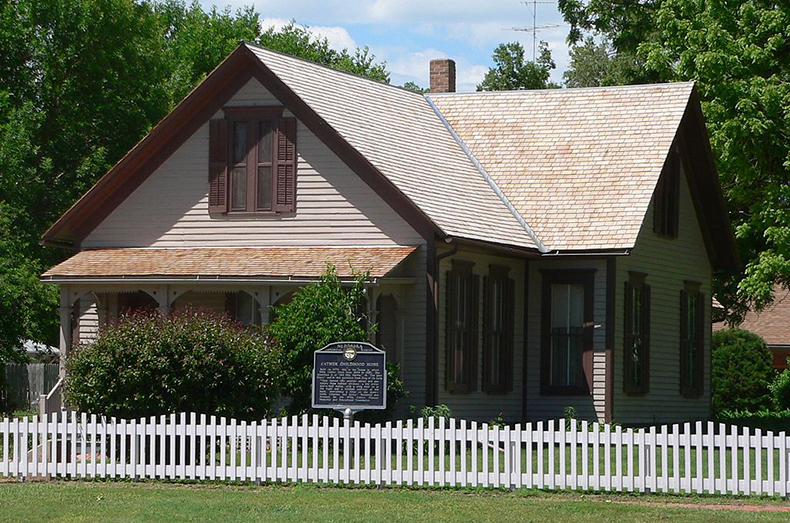 Wilella “Willa” Sibert Cather (1873-1947) was born in 1873 in the Back Creek Valley of Virginia. She was the oldest of seven children–four boys and three girls. She was taught at home and given classical authors to read.

In 1883, her father sold the family home and moved his family to Webster County, Nebraska, where her grandfather Cather had already settled after getting a Homestead Act deed. In 1884, the family moved to Red Cloud, Nebraska. She attended school in Red Cloud, and for a time became interested in the writings of Charles Darwin and dreamed of a career in science.

Enrolling in the University of Nebraska in Lincoln in 1891, Cather studied the classics and wrote short stories. Getting an article published in the Lincoln Journal changed her pursuit of a career in science to one in literature. Following her graduation in 1895, she worked at a Lincoln newspaper for a year before accepting a job as editor and publisher of a new magazine in Pittsburg, Pennsylvania. From there she moved to the Pittsburgh Daily Leader as a copy editor and later as a music and drama critic.

Over the next four years, Cather moved on to become a teacher, a world-traveler and had two books published. In 1906, publisher S.S. McClure called her to New York to be managing editor of his magazine, McClure’s. She served in this position for seven years and made a name for herself in the publishing and literary world. In 1912, her first novel was serialized in McClure’s under the title, Alexander’s Masquerade (retitled as a book Alexander’s Bridge). She then resigned from the magazine and for the rest of her life wrote fiction. Cather received the Pulitzer Prize in 1923 for One of Ours.

Cather received many honors during her writing years: degrees from Nebraska, Yale, Princeton, New York University, Colombia, Michigan, California, Creighton, and Smith College. She was elected to the National Institute of Arts and Letters in 1929 and to the Academy in 1938; she received the Howell’s Medal for fiction in 1944.

At the age of seventy-three, Willa Cather died of a cerebral hemorrhage in New York City in 1947, and was buried in Jaffrey, New Hampshire.

Willa Cather’s childhood home is in Red Cloud, Nebraska. Built in 1878, the house is a National Historic Landmark. Cather lived in this house from 1884 to 1890 – a time that later proved to be a critical in her development as a writer. Many of her best known writings deal with life in and around Red Cloud. The Cather House figures prominently in The Song of the Lark, The Best Years, and Old Mrs. Harris. This house is the most important Nebraska building associated with Cather’s literary career.