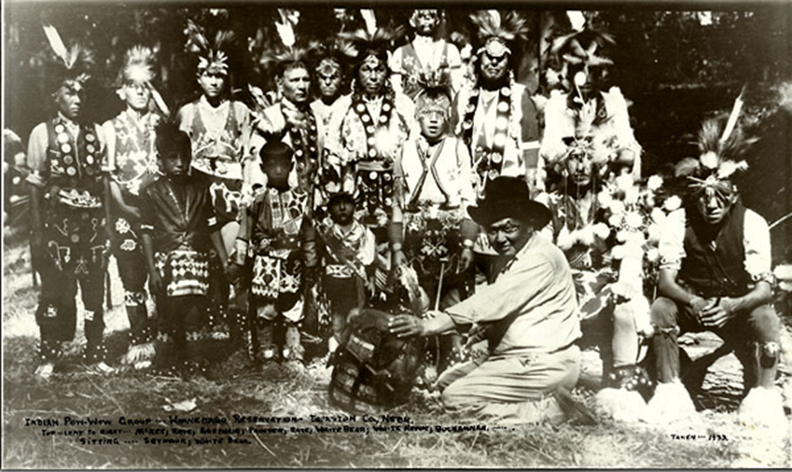 The history of the Winnebago Tribe of Nebraska actually goes back thousands of years to the area that is today known as the state of Wisconsin. Although their homeland lay between Green Bay and Lake Winnebago in northeast Wisconsin, they roamed the area between Upper Michigan and present-day Milwaukee extending west to the Mississippi River.

As a result of several defeats at the hands of invading tribes and epidemics in the 1600s and 1700s, the Winnebago were forced to move into southern Wisconsin and northwestern Illinois. As American settlement continued in Wisconsin during the early 1800s, the Tribe was again forced to move into northeast Iowa after ceding their lands to the government. For the next fifty years, the Winnebago were moved around to various locations in Minnesota. Eventually, they were deported to South Dakota where they were forced to live on the Yankton Sioux reservation.

It was this final forced movement that caused the Winnebago to rebel. With little in common with the Yankton Sioux, many in the Tribe began moving back into Minnesota, Wisconsin and Iowa. With the Omaha Reservation close by, about 1200 members fled down the Missouri River to seek refuge there. Little Priest, the last Winnebago War Chief, began negotiations with the Omaha Tribe, and in 1863, the Omaha agreed to sell the northern part of their reservation to the Winnebago, signing the agreement on a beaded wampum belt. During this time, General Alfred Sully was leading U.S. Army troops in battles against the Lakota Bands, Northern Cheyenne, Northern Arapahoe and the Santee Dakota Bands. He asked Chief Little Priest to commit Winnebago warriors in the battles, and in return, would use his influence in Washington D.C. for the government to agree to the Winnebago-Omaha agreement. Even though he dreaded the idea of fighting against his Native brothers, Little Priest agreed in order to save his tribe. Little Priest would himself die in one of the battles. The newly acquired reservation became an executive order reservation in 1865, and it was signed into law in 1866. Little Priest is honored annually with a Memorial Pow-wow on the Winnebago Reservation.

The Nebraska Winnebago still have 27,500 acres from their 1865 reservation with 3100 tribal members in the 2000 census. The Wisconsin Winnebago, made up of tribal members who wanted to return to their traditional homeland, have 4,400 acres (333 acres tribally owned) scattered in small holdings across ten counties in Wisconsin.

The Winnebago Tribe of Nebraska chartered Little Priest Tribal College in May of 1996. The major focus of LPTC is to provide two-year associate degrees, and to prepare students to transfer and successfully complete a major at a four-year institution. Equally as important, and included in the college’s mission statement, is the commitment to offer language and culture classes. These classes provide students with the opportunity to improve their knowledge of Ho-Chunk language and culture and also help build self esteem. The college is named after Chief Little Priest, the last true war chief of the Winnebago Tribe.

The Winnebago Bison Project was established to restore bison to the reservation in a manner that is compatible with their spiritual revitalization, cultural beliefs and practices, ecological restoration, holistic renewal, agricultural and economic development, and educational development. Meat is provided to the elders of the community, the schools and tribal members as a way of maintaining a traditional food source.