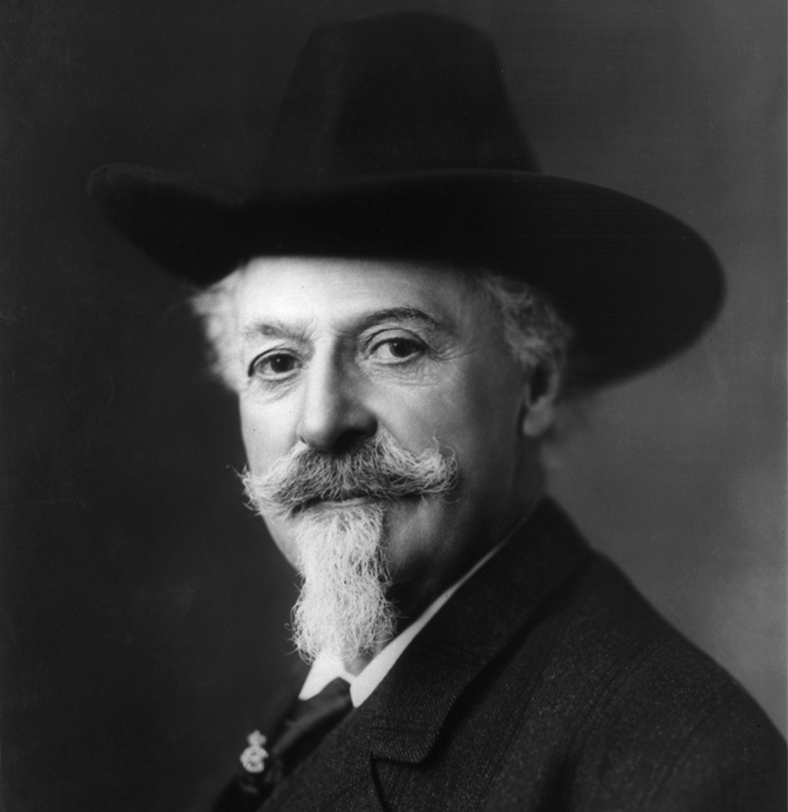 William F. “Buffalo Bill” Cody (1846-1914) was born in Scott County, Iowa, in 1846 and grew up on the prairie. When his father died in 1857, his mother moved to Kansas where Cody worked for a wagon-freight company as a mounted messenger and wrangler. In 1859, he tried his luck as a prospector in the Pikes Peak gold rush, and the next year, joined the Pony Express.

During the Civil War, Cody served as a Union scout in battles against the Kiowa and Comanche and then enlisted with the Seventh Kansas Cavalry where he saw action in Missouri and Tennessee. After the war, he married Louisa Frederici in St. Louis, Missouri and continued to work for the Army as a scout and dispatch carrier, operating out of Fort Ellsworth, Kansas.

In 1867, Cody took up buffalo hunting, a job that gave him his nickname, “Buffalo Bill”. He hunted buffalo to feed the construction crews of the Kansas Pacific Railroad. By his own count, he killed 4,280 head of buffalo in seventeen months. He is supposed to have won the name “Buffalo Bill” in an eight-hour shooting match with a hunter named William Comstock.

Cody scouted for the Army again in 1874 and 1876. In July of 1877, Cody established the Cody-North ranch on the head waters of the Dismal River in the Nebraska Sandhills.

While Cody was earning a reputation for skill and bravery in real life, he was also becoming a national folk hero, thanks to the dime novels of Ned Buntline (pen name of the writer E. Z. C. Judson). Beginning in 1869, Buntline created a Buffalo Bill who ranked with Davy Crockett, Daniel Boone and Kit Carson in the popular imagination who was a mixture of incredible fact and romantic fiction.

As a Wild West showman, Cody helped popularize the cowboy as a romantic figure in American History. He, with Major John Burke and W.F. Carver, started the Wild West Show. Cody, in partnership with Nate Salisbury, continued this show for many years, combining frontier attractions into active entertainment, which pleased audiences in the United States and Europe.

William F. Cody considered North Platte, Nebraska, his hometown. North Platte residents looked fondly on Cody’s connection to their town during his lengthy career as a showman, whose Wild West Shows helped create the legend of American West. “Scout’s Rest Ranch” was his home near North Platte and included the 1886 French Second Empire house (reported to cost $3,900), a one-and-one-half-story frame dwelling that features a prominent tower, the late 1880s barn, a cobhouse, an icehouse and a wine cellar. His ranch spread over four-thousand acres.

Cody died in Denver, Colorado, on January 10, 1917, and is buried on Lookout Mountain overlooking that city.