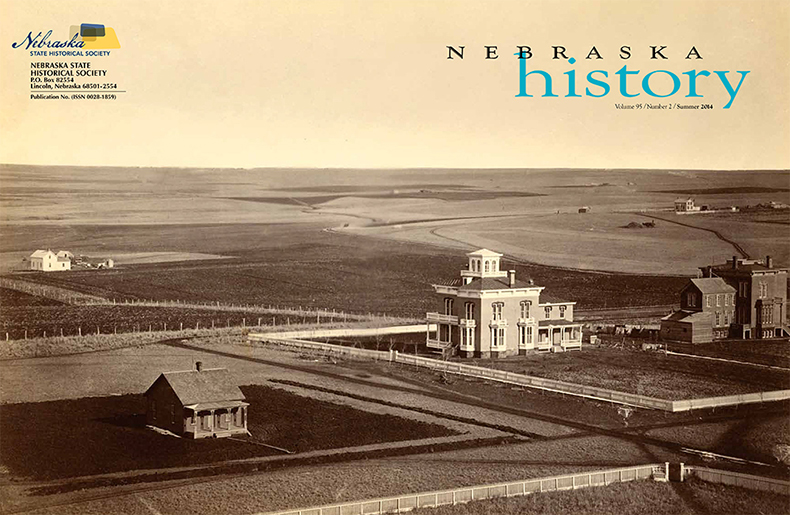 President Andrew Johnson signed the act making Nebraska a state on March 1, 1867. This set off a fierce struggle over the location of the new state’s Capitol. Since 1854, those residents living south of the Platte River had complained of lack of representation when Nebraska’s territorial capitol building had been located in Omaha.

The then current Omaha Capitol building was built in 1857-58 and people in the city believed it was sturdy enough to house the new state’s legislative sessions for several more years. It was also well-located in relation to Nebraska’s 1867 population. But, it was still north of the Platte River. People living south of the river wanted the new capitol building moved to their part of the state.

When Nebraska’s first state legislature met to decide the location of the Capitol building, there was little protest from those living north of the Platte River and it looked like the bill to remove the Capitol from Omaha would easily pass. A last-ditch attempt to steer Democrats living south of the river to vote against the bill came from Omaha Senator J. N. H. Patrick, who attempted to revive Civil War hatreds by amending the bill to remove the name “Capital City” and replace it with “Lincoln” (for Abraham Lincoln). Senator Patrick assumed that the people living south of the Platte River, nearer to Kansas, would still have very strong feelings against Abraham Lincoln, and would have the capitol stay in Omaha rather than have a capital named after President Lincoln. But Senator Patrick’s “trick” failed. People living south of the Platte River were happy to have the new capital city in their part of the state, even with the name “Lincoln”. The removal act also called for the formation of a Capital Commission, to be made up of the three principal officers in the new state government. Governor David Butler, Secretary of State Thomas Kennard and Auditor John Gillespie made up the commission. Their tour of sites began July 18, 1867. They looked at Ashland, rural Butler County, Milford, Camden, Yankee Hill (Saline City), and Lancaster. By July 29 they were back in the Salt Creek Valley and the village of Lancaster for a second look. When the first ballots were cast for a new Capitol site, Butler, who was influenced by the opinion of his Secretary of State, also voted for the Salt Creek Valley. Gillespie voted for Ashland, but switched to Lancaster on the next ballot to make the decision unanimous. On August 14, 1867, their decision was formally announced. Lancaster was to become Lincoln, capital of the new state of Nebraska. The tiny village of Lancaster was comprised of two stores, one shoe shop, six or seven houses and about thirty residents. Those who had opposed the move from Omaha now became very angry at this choice. Lancaster had no river, railroad or steam wagon. Governor Butler feared that unless the new Capitol was completely built and ready to receive the State Legislature in January 1869, Lincoln would lose its capital status, and the removal plan would fail after all. All three commissioners decided to build their homes right away. On January 8, 1870, the Nebraska State Journal noted that auditor Gillespie and his family had arrived in town to take possession of their newly completed home. Secretary Kennard, it noted, would “follow suit immediately upon his return from Washington.” Kennard had moved to Lincoln in the fall of 1868. Prior to the completion of their homes, both Kennard and Butler lived for some time in the newly constructed state Capitol building. The construction of their three mansions gave other potential investors the confidence to build in Lincoln as well.