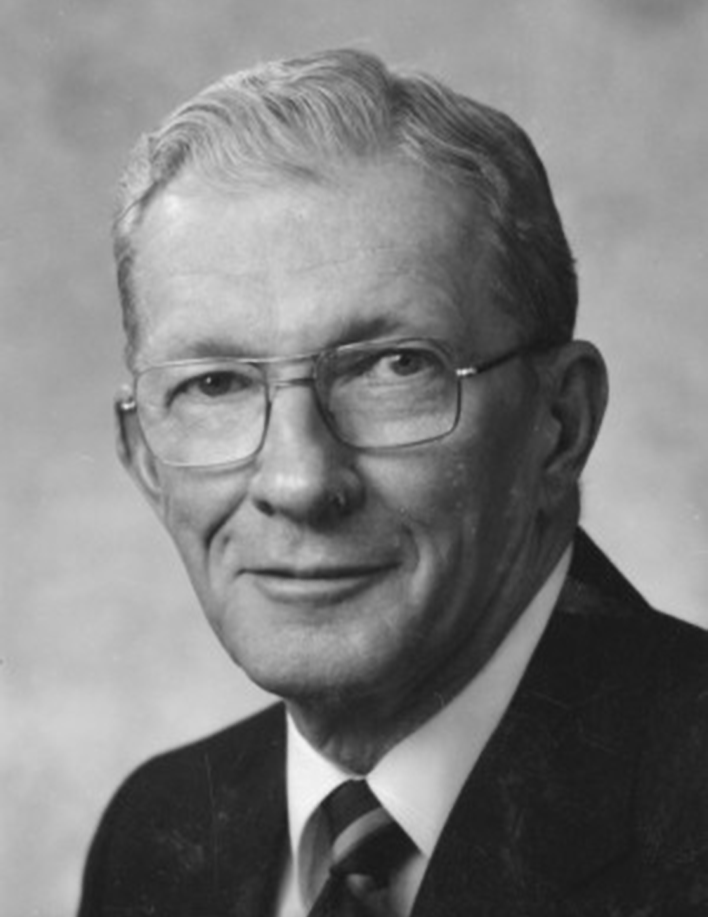 Chief Justice of the Nebraska Supreme Court, William C. Hastings was born in Newman Grove, Nebraska in 1921. As a child, he thought about becoming an engineer, a forest ranger or joining the Navy.

However, during his senior year at Newman Grove High School, Judge Hastings enrolled in a new course titled, “Practical Arts”, which combined business law with debate and public speaking. He was now convinced that he wanted to be a lawyer.

Hastings still wanted to join the Navy, but his color blindness kept him out of the U.S. Naval Academy. He decided to enroll at the University of Nebraska at Lincoln in a program that allowed him to take law classes during his senior year. He received a B.S. degree in business administration in 1942 and enrolled in the Law College. World War II broke out and Judge Hastings served for eighteen months as a FBI finger-print specialist and two more years in the U.S. Army. He returned to Lincoln to finish his law studies and graduated in 1948.

In 1946, Justice Hastings married his wife, Julie Ann Simonson and would go on to raise three children, Pam, Chuck and Steve.

Judge Hastings practiced law with the firm of Chambers, Holland, Dudgeon & Hastings in Lincoln from 1948 to 1965. He then sat as Judge of the District Court of Lancaster County from 1965 to 1979 until he was appointed to serve as a Justice on the Nebraska Supreme Court by Governor Charles Thone. He was appointed Chief Justice by Governor Kay Orr in 1987 and served until his retirement in 1995.

During his time on the Supreme Court, Hastings became one of the primary advocates for establishing the Nebraska Court of Appeals to address the high court’s backlog of cases and developed the Nebraska Alternative Dispute Resolution system. As a judge, he was committed to administration of equal justice for everyone and to addressing gender and racial discrimination issues in the court system.

Judge Hastings made a lifetime of serving the Lincoln area community. He was a past president of the Lincoln Junior Chamber of Commerce, past vice president of the Lincoln Community Council, and a member of the board of directors of the Cornhusker Council of Boy Scouts, the Lincoln Parks and Recreation, and the State Retirement Board. He served the First Presbyterian Church of Lincoln in many ways, as an elder, trustee, deacon and on Board of Directors of the First Presbyterian Church Foundation. He was a member of AF&AM Lodge 305 and the Scottish Rite Masons.

Asked why he had agreed to accept the position as Chief Justice at the age of 66, he said he felt everyone had a duty to give back to society if they were able to do so. That duty to return something to the community was the beacon leading his professional life and one part of his legacy to his children and grandchildren and others around him. In presenting a speech to the National Honor Society in his hometown, Newman Grove, he reminded the students of the four elements of the National Honor Society: leadership, scholarship, character and service. He commented on the first three elements and then said “the most important of all is service, for without service, you’ve wasted the other three. Talents not shared are not talents. Service is simply paying your dues for being a member of society.”

Information provided by his family in July, 2014.