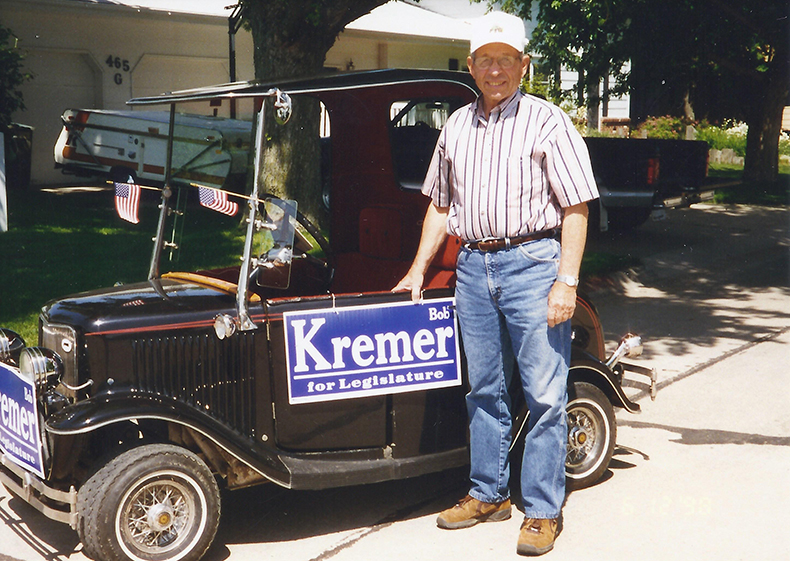 The Kremer Family’s history in Hamilton County began in 1885 when Maurice Kremer’s grandparents (Christian and Katherina Rediger) arrived by train from Illinois and broke the virgin prairie and began farming six and half miles southwest of Aurora. At the time there was only a house, corn crib and three hay stacks on the place, no trees and no barn nor out buildings.

Just prairie, prairie and more prairie. “The prairie grass with bluestem flourished luxuriantly,” according to one of Maurice’s uncles. “Geese and ducks came by the thousands in the spring and quail and prairie chickens were also plentiful. Hunting in those years was quite a sport.”

The first years were prosperous with weather conditions that yielded good crops. The corn was often piled up on the prairie because they had no grain storage. In 1890 the family experienced the first partial crop failure due to hot, dry and windy conditions. In the same year they witnessed the destruction of a tornado that passed through the county near their home, leaving a path of destruction.

In 1893, the family experienced the first total crop failure. The children often said they couldn’t raise enough corn on 125 acres to keep one hen alive. Once again family members recall covered wagons coming through from the west, folks who had lost everything – seeking shelter, food and work, carrying only the belongings they could load on a wagon. Recalling those days many years later, one of the children said, “I shall never forget the expression of defeat, disappointment and bewilderment written upon the faces of these people who had no home, no funds and no definite destination – all their expectations shattered. The tears and extreme poverty left an indelible impression.”

Mattie, one of the Rediger’s daughters, married Ben Kremer who purchased the farm from Mattie’s parents. Ben was born in Milford, Nebraska and farmed there until after he had married Mattie Rediger and their oldest children (Maurice and Ezra) were born. They moved to the farm near Aurora in 1913. The farm animals and equipment came by freight train, the family came a few days later by passenger train. Ben loved horses and was an excellent horse trainer. During the difficult times he would often break horses for extra cash to keep the family going. 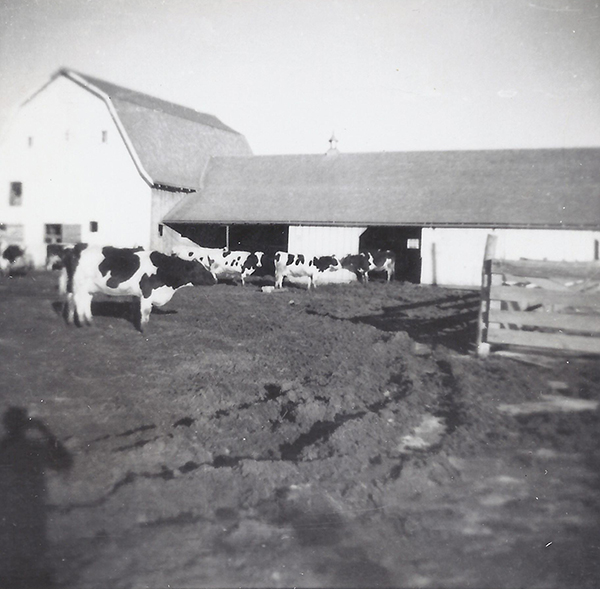 Maurice attended school through the tenth grade and later took a two -year agriculture course at the University of Nebraska. Maurice married Alice Troyer in 1932 and they began farming land that her family owned. The 1930s were years of drought with very little rainfall. Banks closed, and farm land values dropped to about $30 per acre. Hogs weighing 200 pounds were worth $6-7 and big steers $25-30, and he sold his corn for 9 cents a bushel. 1934-36 were total disasters with no crop at all. They survived with a large garden watered from their windmill. In 1939 they moved to another farm near Aurora and began milking cows in earnest (thirty head), which was their main source of income.

During the 1940s, during the war, there was great demand for food while at the same time there had been a drought that was almost nation-wide and the needs were very acute. This brought on the idea of irrigation. Maurice had witnessed the irrigation experiment in nearby communities where a large underground body of water was discovered.

He decided he wanted to irrigate his eighty-acre farm. He went to the local bank to borrow money for a well, but the banker refused citing evidence that came from the University of Nebraska saying irrigation wasn’t economically feasible. Nevertheless, a local widow heard about Maurice’s desire to put down a well, and loaned him the money. The first Kremer irrigation well went down in 1941, one of the first in Hamilton County. Maurice also raised cattle, chickens, sheep and hogs.

Maurice helped found several local businesses, and served on the Aurora School board and then served for twenty years in the Nebraska Legislature representing the thirty-fourth district. During the ”˜60s and ”˜70s, Maurice led the effort to conserve and protect our precious supply of underground and surface water in Nebraska, having seen that it was the life blood of agriculture in the state. He helped craft legislation initiating Nebraska’s Natural Resource Districts, helped found the Nebraska Community College system and by the end of his legislative career was known across the state as “Mr. Water”.

Following his graduation from college, one of Maurice’s sons, Bob, came back to Aurora and began farming with his wife Bev in 1958. Bob loved livestock, particularly raising cattle. In the following years Bob grew the cow/calf operation to more than one- hundred -fifty head and began a cattle feeding operation that ultimately reached more than two-thousand head per year. As the farm prospered, additional land was rented and purchased with the farm expanding over the coming decades to more than fifteen hundred acres. Bob’s brother Ken returned to Aurora with his family in the 1970s and the farm expanded in both the number of acres being farmed as well as the number of livestock being raised and fed. The advent of pivot irrigation brought new possibilities to farming with more efficient and effective use of water in the growing of crops. Bob had one of the first electric center pivots in Hamilton County.

The early 1980s brought significant challenges to farming, with the farm crisis brought on by high interest rates and low prices for commodities. While experiencing many difficult months, Bob navigated the family farm through the crisis, and assisted the farming industry in Nebraska through this involvement in the Nebraska Farm Bureau serving in a variety of capacities on the local, state and national level. Bob also served on the Aurora School Board and in 1998 was elected to the Nebraska Unicameral Legislature where he served two terms, chairing the Agriculture Committee for several years and traveling with Governor Johanns on a trade mission to Japan seeking to expand export markets for Nebraska Agricultural products.

The Kremer farm continues to thrive today, with several branches of the family still farming the land that was first settled in 1885. Two of Bob and Bev’s children, Sheila Miller and Shauna Moody, and their families continue to farm and raise cattle on the land Maurice and Bob farmed for decades. Farm productivity continues to expand while at the same time, conservation of the soil and water has improved greatly as a result of many new technological advances in agronomy, genetics, computer and satellite technology and farming practices. These advances have helped fuel a dynamic farm economy in Nebraska that helps feed and provide fuel to the world. The Kremer family is proud to have been a part of the Nebraska agriculture story for more than 125 years.

Information provided by the Kremer family in July 2014.