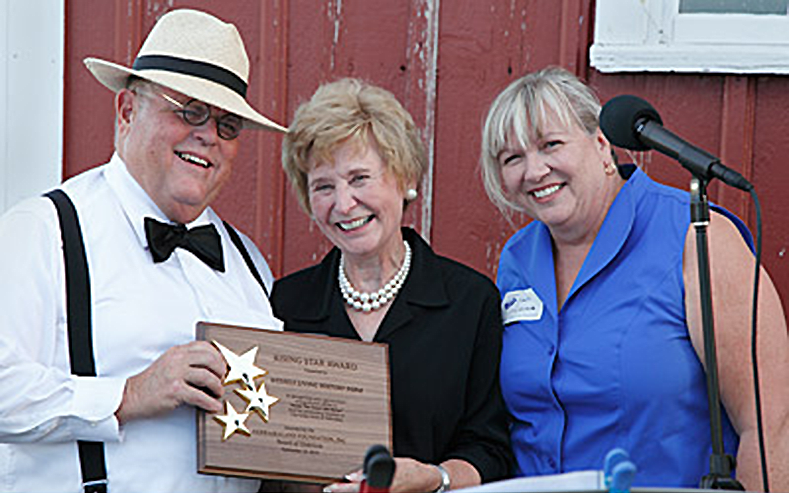 The NEBRASKAland Foundation was established to promote Nebraska through programs and awards which celebrate the State’s social, historical, cultural, educational and economic heritage. Organized in 1962 under the leadership of Governor Frank Morrison, the Foundation was the forerunner of many of Nebraska’s current economic development and tourism activities.

The NEBRASKAland Foundation’s premier event is the annual Statehood Day Dinner held in the State Capitol Rotunda to celebrate Nebraska’s statehood anniversary on March 1. At this event, the Foundation recognizes Nebraskans who have distinguished themselves and the state. Since 1982, more than one hundred and forty Nebraskans have been honored with the Foundation awards.

The Foundation is a strong supporter of youth activities which encourage understanding and appreciation for the State’s culture and heritage. It sponsors annual student competitions at the Nebraska State Fair in art, computer graphics, essay/poetry, impromptu speech, PowerPoint and social studies. The Foundation also helps sponsor the annual Nebraska History Day celebration.

To learn more about the Foundation, please visit its website at www.nebrasklandfoundation.org.

Information provided by representatives of the NEBRASKAland Foundation in June 2014.

Cover photo: Dale Clark, Education Coordinator, and Elaine Stuhr, Chair of the Board of the Wessels Living History Farm, receive the NEBRASKAland Rising Star Award from Patti Peterson of the Foundation.