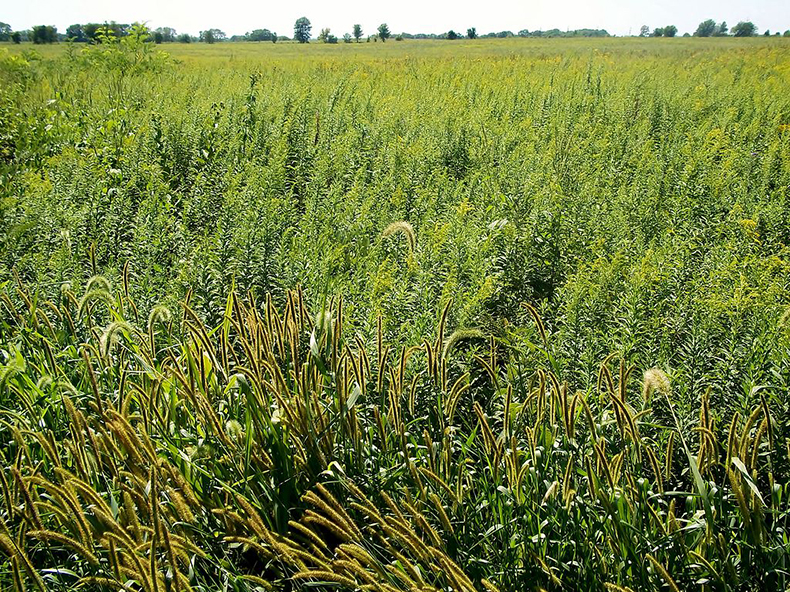 In Nebraska, the Tallgrass Prairie Ecoregion covers the eastern fourth of the state, but this prairie type also extends further westward into the Mixedgrass and Sandhills Ecoregions along stream valleys of the Republican, Platte, Loup and Niobrara rivers. Approximately two percent of Nebraska’s tallgrass prairie remains mostly as remnants less than eighty acres in size.


Glaciers, wind and water have shaped the topographyof the tallgrass region over the last several million years. Today, the land surface is mainly rolling hills intersected by stream valleys. The Tallgrass Prairie Ecoregion receives twenty-five to thirty-six inches of annual precipitation, more than other ecoregions in the state.

The Platte River is a classic example of a prairie river. Historically, the river was shallow with a braided channel measuring three miles at its widest with a multitude of sandbars. The floodplain was fifteen miles wide and was typically covered with lush, wet meadows and freshwater marshes. Spring floods limited tree growth and created wide sandbars barren of vegetation. The ecoregion has many smaller streams including Papio Creek, Turkey Creek and Bazile Creek.

Upland tallgrass prairie is dominated by big bluestem, Indian grass, switchgrass and Canada wild-rye. Tallgrass prairies also include hundreds of species of wildflowers like the prairie blazing-star, sky-blue aster and purple coneflower. Forbs such as goldenrod, clover, sunflowers and milkweed are also hardy plants in the prairie.

More than three hundred species of resident and migratory birds have been documented in the Tallgrass Prairie Ecoregion. It is home to more than fifty-five mammal species; most have a widespread distribution and can also be found in Central and Western Nebraska. White-tailed deer are common big game animals and mule deer are infrequently found in upland grasslands. The most abundant large predator of the region is the coyote, but other predators such as the red fox and American badger can be found here as well. The bobcat, least weasel, long-tailed weasel and American mink can be found in wooded areas, wetlands and along river valleys.

Though referred to as the Shortgrass Prairie Ecoregion, much of Western Nebraska supports dry mixedgrass prairie in addition to areas of shortgrass, sandsage prairie, sand prairie, pine woodlands, badlands, and other vegetation types.The low precipitation in the Shortgrass Prairie Ecoregion, in conjunction with grazing, causes most short-grass vegetation to rarely exceed ten inches in height.

Threadleaf sedge western mixedgrass prairie is the primary vegetation type in the Shortgrass Prairie Ecoregion, though northwestern mixedgrass prairie dominates on the shale-derived soils north of the Pine Ridge. True shortgrass prairie is limited to dry knobs and areas with an abundance of clay soils. Sandsage prairie is most common in Dundy, Chase and Perkins counties and sand prairies are scattered throughout the ecoregion. Ponderosa pine woodlands occur on rocky escarpments, primarily the Pine Ridge and Wildcat Hills. Badlands and rock outcrop communities are also present on escarpments.

The North Platte River bisects the ecoregion and has wet meadows, deciduous woodlands, and numerous tributary streams, many of which are coldwater. Other streams in the ecoregion include Lodgepole Creek in the Southern Panhandle and the upper Niobrara and White Rivers in the North.

A variety of mammals are known to occur in the Shortgrass Prairie Ecoregion. Both white-tailed and mule deer, elk and pronghorn are abundant with some bighorn sheep. Coyotes and bobcats are the most common large predators, but in recent years mountain lions have also been recorded in the Panhandle. The ecoregion serves as one of the remaining strongholds for the swift fox, a state endangered species. Prairie dogs are locally abundant, and the federally endangered black-footed ferret once lived in the ecoregion. Other mammals include the river otter, black-tailed jackrabbit, American badger, plains pocket gopher and northern grasshopper mouse.