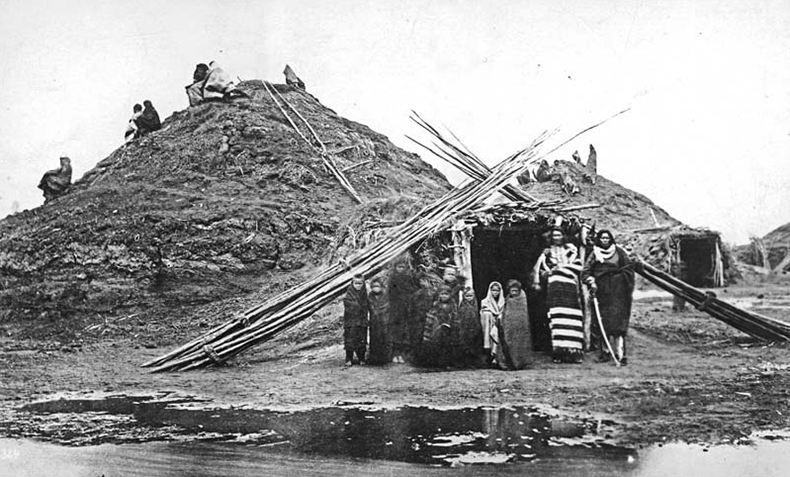 The Pawnee Nation consists of four confederated bands: the Kitkahahki, Chaui, Skidi, and Pitahawirata. Pawnee history on the central Plains dates back more than 700 years.

Claiming a vast homeland in much of what became Nebraska and Kansas, each band maintained its own political leaders, priests, doctors, and towns. They lived a politically independent existence in accordance with a mandate given to them by their supreme deity, Tirawahut, to carry on their traditional beliefs, customs, and economic pursuits that blended hunting and agricultural pursuits. After planting their crops of corn, beans, pumpkins, and squash during the spring they departed their earthen lodge town along the Platte River and its tributaries and return home in time to harvest their crop. In the early winter, they conducted another extended buffalo hunt.

Pawnee oral traditions indicate they once had a very large, prosperous, and powerful population. Diseases such as smallpox and cholera spread by U.S. explorers, traders, and overland emigrants devastated their numbers as the nineteenth century progressed. Facing economic hardships, escalating conflict with encroaching Indian enemies, and intruding white American travelers and later settlers, the beleaguered Pawnee chiefs reluctantly entered into land cession treaties with the U.S. government. In 1833 and 1857, they exchanged much of their land in return for U.S. promises to provide them schools, trade good, assistance, and other provisions. In 1848, they ceded a strip of land that included Grand Island to the U.S. government. They retained a small reservation that became Nance County after their removal.

Although the Pawnees never consented to the eradication of their customary ways of living, U.S. officials used the treaties to subject them to a destructive campaign of coercive assimilation. Factors including overcrowded and unsanitary conditions, inadequate funding, and the Pawnees’ preference to follow the customary way of life resulted in only a few Pawnee parents sending their children to a school established on their small reservation. Meanwhile, white hunters and the U.S. army engaged in a campaign to destroy the buffalo that the Pawnees relied on for subsistence.

Despite these problems, in 1864 they entered into a military alliance with the U.S. government. From then to 1877, they sent hundreds of their men to fight common enemies in special army units known as Pawnee Scouts. Despite the service and valor of these men, the United States proved to be an untrustworthy ally.

In 1875, facing unrelenting pressure from U.S. settlers, a misguided and coercive U.S. policy of cultural genocide, and hunger, the Pawnees reluctantly surrendered their reservation and move to a new one in present-day Pawnee County, Oklahoma. There they continued to face the ill-effects of cultural oppression, disease, and starvation. By 1900, their population diminished to about 600 people. With the buffalo gone and few alternatives to follow, they, under U.S. pressure, gradually adopted many white American ways without surrendering all vestiges of their values, beliefs, and customs.

With a population now over 3,000 members, the Pawnees are working to overcome the harm inflicted on them by the United States while retaining their culture and revitalizing their language. With the U.S. government having reformed its Indian policies, the Pawnee governing body has established the Pawnee Nation College which seeks to foster and promote the rich cultural diversity in the region and its complexities. Their students engage in challenging academics and training programs to help them reach their potential. In addition, the tribe has developed community service programs designed to meet the needs of their people.

The Pawnee proudly celebrate their tradition of serving in all U.S. military conflicts dating back to the Indian Wars. On October 10, 2011, the U.S. Army recognized this distinguished tradition by renaming the Bravo Company 486th Civil Affairs BN to the Bravo/Pawnee Company. In a July 3, 2014, ceremony, the Pawnees honored nine of their men, known as Indian code talkers, who used the Pawnee language on World War II battlefields.

The Pawnees continue to consider the lands of Nebraska with reverence as their ancestral homelands.

Resources:
The Pawnee Nation of Oklahoma