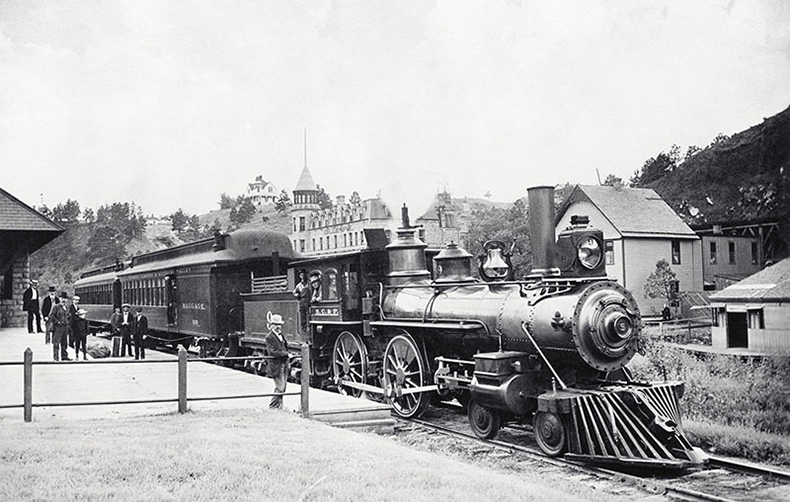 The course of U.S. history was forever changed some 160 years ago, when steel tracks were laid alongside the routes of cattle trails and wagon trains. There was no stopping the waves of settlers eager to claim land or explore opportunities in the West, and rail was a necessity for the booming cattle trade. The western railroads helped realize the American dream, reshaping the country’s landscape and building a foundation for a new economy.

The forefathers of BNSF Railway were dreamers, too. They recognized that not only would railroads be the catalyst for settlement and growth in the West, but that transcontinental trains were needed to open coast-to-coast commerce. The legacy of men such as Cyrus K. Holliday, founder of the Santa Fe Railway, and James J. Hill, builder of the Great Northern Railway, was the development of an entire region in a rapidly growing nation.

Today, BNSF Railway, created through the September 22, 1995, merger of Burlington Northern Inc. and Santa Fe Pacific Corp., builds on the traditions of its hundreds of predecessors and provides customers with efficient transportation, better service, logistics expertise, market reach and the most environmentally preferred mode of land transportation. The railroad currently serves the western two-thirds of the United States as well as portions of Canada and key Mexican gateways with some 32,500 route miles.

Many of BNSF’s 390 predecessor railroads were highly successful and innovative. They carried mail to connect with the Pony Express, introduced railcars equipped to sort U.S. mail en route and were among the first to operate the printing telegraph and to use train radio and centralized traffic control.

BNSF predecessors were also leaders in equipment modernization, introducing the Zephyr (America’s first diesel-electric, streamlined passenger train) and developing the nation’s first vista-dome car. More recently, the predecessors helped the United States create the largest grain logistics system in the world and pioneered the development of the intermodal business and the use of high-horsepower AC (alternating current) traction locomotives.

The oldest of the BNSF predecessors were both founded in 1849: the Aurora Branch Line (which would eventually grow into the Chicago, Burlington & Quincy – CB&Q) and the Pacific Railroad of Missouri (a portion of which would become the St. Louis-San Francisco Railway or “Frisco”). Ten years later, the charter was approved for what was to become the Atchison, Topeka & Santa Fe Railway (Santa Fe) in Topeka, Kansas.

The Santa Fe was built along the “Trail of Faith,” the route of commerce known as the Santa Fe Trail. The railroad was considered by many to be the over-ambitious dream of Cyrus K. Holliday, whose vision was to see the Santa Fe extend to Chicago, St. Louis, Mexico, San Francisco and Galveston, Texas. Holliday’s legacy was a railroad that endured, eventually merging with or acquiring more than seventy other lines. The railway was essential to the growing Southwest, and today its pioneer spirit endures in BNSF Railway.

The youngest predecessor in the BNSF family tree is the Burlington Northern Railroad (BN), which was created in 1970 with the merger of five railroads: the CB&Q; the Great Northern (GN); the Northern Pacific (NP); the Spokane, Portland and Seattle (SP&S); and the Pacific Coast, a small regional railroad. In 1980, the Frisco was added to the BN. In many ways, the creation of the BN was the realization of empire builder James J. Hill’s dream of a transcontinental railroad connecting the East to the Pacific Northwest. But the merger to create the BN took several attempts and more than 75 years to realize. Even though the BN was young compared with many railroads, it grew up during a time of great economic and regulatory change and growth, allowing it to build upon the entrepreneurial spirit of its more than 300 predecessors.

With the passage in 1980 of the Staggers Act, which partially deregulated the railroad industry, BN was the first in the industry to organize its marketing department into business units to improve focus on major traffic lines. Deregulation brought with it innovation and creativity. Santa Fe developed the first land-bridge container train, linking Asia with Europe using connecting rail lines in the East.

In the 1980s, in response to rising energy and inventory carrying costs, lightweight alloys and plastics began displacing the bulky, heavy materials that railroads traditionally hauled. Also, as manufacturers wanted materials moved to assembly lines and finished products moved to retail outlets “just in time,” they required faster, more frequent, on-time deliveries. These new developments played to the strengths of trucks and the weaknesses of railroads at the time.

Both BN and Santa Fe, however, would help lead the rail industry’s effort to capture a greater share of this market with service that would harness the strengths of both truck and rail: intermodal.

In 1978, Santa Fe built “Fuel Foilers,” articulated 10-unit spine cars for long-distance intermodal service. In 1990, the company entered into a relationship with J.B. Hunt, the first such collaboration between a railroad and trucking firm, which led to Santa Fe’s preeminence in the intermodal business.

Intermodal was just one of the businesses pioneered by BNSF predecessors. In the 1970s, BN began laying the foundation for an important new fuel source for generating electricity: low-sulfur coal from the Powder River Basin (PRB) in Wyoming and Montana. Not only was PRB coal lower in cost, it burned more cleanly than other types of coal, and thus was better for the environment. Demand for PRB coal later gained momentum with the federal Clean Air Act and its emission standards for coal-fired electric plants. To help haul PRB coal, BN became the first North American railroad to make a commitment to AC-traction locomotives in the early 1990s. Santa Fe had already helped advance new locomotive standards in the late 1980s, improving cab design.

To help manage and improve service, BN opened a Network Operations Center (NOC) in March 1995, ushering in a new age of railroading with the industry’s largest and most advanced real-time operations control center. In a room the size of a football field, train dispatchers, locomotive assignment desks, crew planners and operations managers electronically “see” and manage trains 24 hours a day. While the NOC was still under construction, negotiations began on a merger agreement between BN and Santa Fe. The merger of the two on September 22, 1995, created Burlington Northern and Santa Fe Railway, the largest rail network in North America at the time.

Information provided by a representative of BNSF in July, 2014.