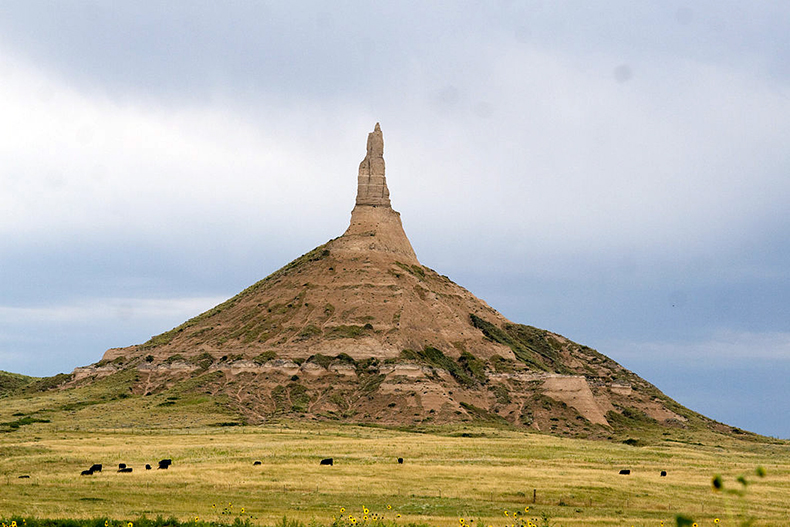 Chimney Rock is a prominent geological rock formation in Morrill County in western Nebraska about four miles from Bayard, Nebraska. The “chimney” rises 300 to 350 feet above its conical base and the entire formation stands almost 500 feet above the surrounding North Platte River valley.

This imposing landmark is composed of layers of volcanic ash and brule clay dating back to the Oligocene Age (34 million to 23 million years ago).

Chimney Rock was one of the best-known landmarks along the Oregon and Mormon Trails. Approximately 500,000 pioneers passed by Chimney Rock on their way west. No one really knows the origins of the name of the rock, although the title “Chimney Rock” probably originated with the first fur traders in the region. In the early nineteenth century, however, travelers referred to it by a variety of other names, including Chimley Rock, Chimney Tower, Nose Mountain and Elk Peak, but Chimney Rock had become the most commonly used name by the 1840s.

For many, the geological marker seemed to be an optical illusion. Some travelers claimed that Chimney Rock could be seen upwards of thirty miles away, and no matter how long one travelled toward Chimney Rock, it always appeared to be off in the distance.

Because of this optical effect, early travel descriptions of the rock varied widely. Some travelers believed that the rock spire may have been upwards of thirty feet higher than its current height due to wind, erosion, or a lightning strike causing the top part of the spire to break off. Compare the painting from the 1880s to the modern-day photograph to see the difference in height. No matter what, over the years, Chimney Rock has continued to capture the imaginations and the romantic fascinations of travelers heading west.

A Fur trader named Warren A. Ferris left the oldest known written description of Chimney Rock. On May 26, 1830, his party reached “Nose Mountain”, which was what Chimney Rock was first called. Joseph Hackney, a “Forty-Niner” on his way to the California gold fields, described Chimney Rock as “the most remarkable object” he had ever seen. Many nineteenth century travelers stopped to marvel at this “natural curiosity.”

Many of the Oregon Trail travelers carved their names on Chimney Rock. Today, very few of those inscriptions still survive due to erosion and vandalism.

Chimney Rock and its surroundings look much as they did when the first settlers passed through in the mid 1800s. On the southeast edge of the base, a small stone monument commemorates a gift from the Frank Durnal family to the Nebraska State Historical Society of approximately eighty acres of land, including Chimney Rock. This plot of land provides a buffer zone to protect the historic landmark from buildings, roads, and fences. The only modern developments are Chimney Rock Cemetery and the visitor’s center. Chimney Rock was designated a National Historic Site in 1956. The visitor center provides information on the history of the Overland Trails and Chimney Rock. The center houses museum exhibits, media presentations and other educational materials concerning life on the overland trails, and a museum shop.