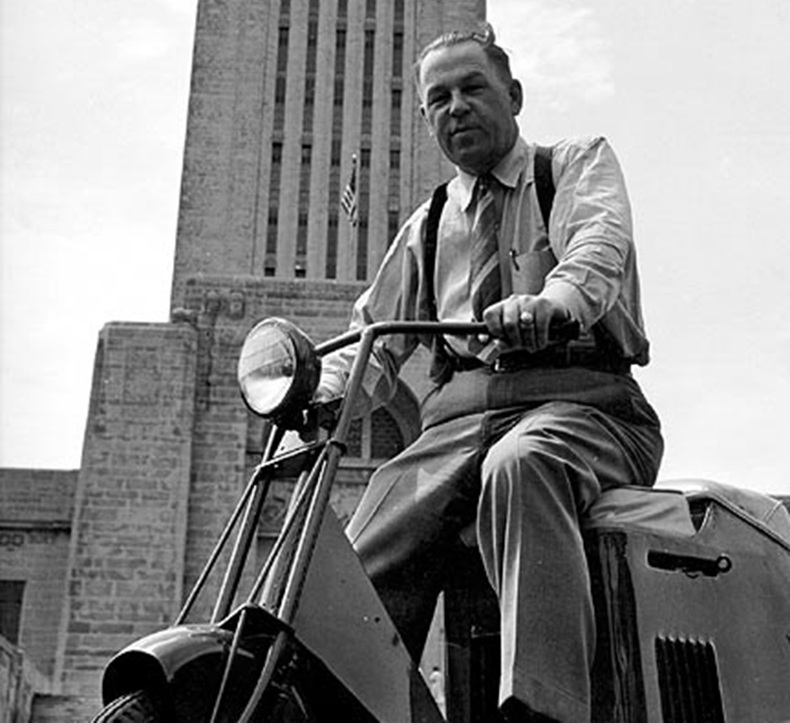 Dwight Palmer Griswold (1893-1954) was born November 23, 1893, in Harrison, Nebraska. He received his early education in the Harrison, Ainsworth, and Gordon Public Schools. He graduated from Kearney Military Academy in 1910, and enrolled at Nebraska Wesleyan University in the fall.

Two years later, Griswold transferred to the University of Nebraska where he received his Bachelor of Arts degree in 1914. Griswold served as a sergeant in the Fourth Nebraska Infantry during the Mexican border conflict in 1916. He also served during World War I as first lieutenant of artillery, and later was promoted to the rank of captain.

After leaving school, Griswold became a clerk with the First National Bank of Gordon and later became a director of the bank. He also was editor of the Gordon Journal from 1922 until 1940.

Griswold entered politics in 1920, winning a seat in the Nebraska House of
Representatives on the Republican ticket. He served three successive terms in the State Senate from 1925 to1931. In 1940, he was elected governor and served for two successive terms.

Following his service as Governor, Griswold joined the Military Government in Germany. He served until June, 1947, when he joined the American Mission for Aid to Greece. He retired from this post in 1948 and was elected to the University of Nebraska Board of Regents two years later.

With the death of U. S. Senator Kenneth S. Wherry in 1951, Griswold entered the race for the unexpired Senate term and won the 1952 election.

Griswold died in the naval hospital at Bethesda, Maryland on April 12, 1954 and his body was brought back to Nebraska where he was buried in Fairview Cemetery, Scottsbluff, Nebraska.