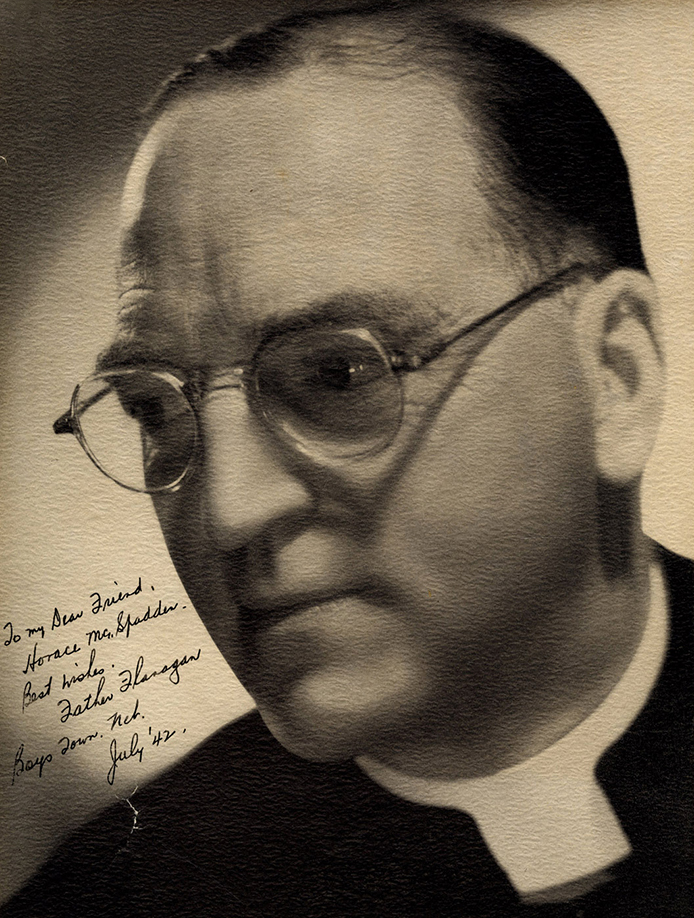 Edward Joseph Flanagan was born in rural west central Ireland. He was the eighth of eleven children, a gifted, frail child who often devoted the long hours of tending his family’s sheep and cattle and reading and prayer. Although poor, his parents were determined to provide Edward with education sufficient for him to become a priest.

Father Flanagan emigrated to America in 1904, with his sister, Nellie, and brother, Patrick. He stayed with his mother’s relatives until he began his studies at Mount St. Mary’s Seminary in Emmitsburg, Maryland. He graduated with honors from Mount St. Mary’s College in 1906, with an A.B. degree that qualified him for entrance in Dunwoodie Seminary in Yonkers as a seminarian for the Archdiocese of New York.

In the first year of Father Flanagan’s studies he contracted double pneumonia and because of his weak lungs was unable to fully recover and was told by the doctors he would have to leave the seminary for at least a year. He moved to Omaha, Nebraska in 1907, to live with his brother, Father P.A. (Patrick) Flanagan, so that his sister, Nellie, who was Father P.A.’s housekeeper, could nurse her younger brother back to health.

In August of 1907, after a complete rest, he sailed for Italy. In Rome he took classes at the Gregorian University, but when the Roman winter set in he became sick again and had to return to America.

He re-joined his family in Omaha, resting and recuperating until he was strong enough to work. He found a job as an accountant with the Cudahy Packing Company where he worked until his restored health allowed him to resume to his seminary studies. In 1909, Father Flanagan traveled to Innsbruck, Austria to complete his studies at the Royal Imperial Leopold Francis University where he was ordained in 1912. His first mass was in St. Ignatius Church in Innsbruck.

Soon after his ordination, he returned to America and followed his brother Pat as assistant pastor to the Irish community at St. Patrick’s Church in O’Neill, Nebraska. Because he had worked briefly as an accountant for a meatpacking firm in Omaha, Father Flanagan accepted a pastoral appointment at St. Patrick’s Parish in one of the city’s most impoverished neighborhoods. At 6:00 p.m. on Easter Sunday 1913, a violent tornado struck Omaha, destroying one third of the city. The morning after the tragedy, Father Flanagan was out with mortician Leo Hoffman picking up the bodies of the dead and making arrangements for their decent burial. The tornado left 155 people killed, hundreds homeless, and fathers of families without work.

After the catastrophic drought of 1913, German and Irish migrants were left without work. Flanagan worked tirelessly for five years to provide the homeless men shelter and food, but he became convinced that long-term correction of the problem had to begin with saving the youth, specifically the boys he saw wandering the streets. In 1917, with a ninety-dollar loan from a pawnbroker, Flanagan opened an orphanage for boys, determined to provide them not only food and shelter but also education, vocational training and moral instruction.

Over time, Father Flanagan was able to purchase a farm about ten miles west of Omaha which would offer a place for boys and young men to live. The farm provided the boys with a way to grow their own food, and the large open fields were perfect for baseball, football and track fields. With the help of business and religious leaders, as well as the citizens of Omaha, Father Flanagan was able to enlarge his new Boys Town to include a five-story brick building, which would house the classrooms, dining hall, gym, dormitory, chapel and infirmary (hospital).

By 1930, Boys Town was home to 280 boys and a new $400,000 building was underway to house the trade school, faculty offices, and gym. During this time, people became aware of the success of Boys Town through Father Flanagan’s radio shows and the Boys Town choir. In 1938, a movie about Father Flanagan called Boys Town made him even more famous.

In the early 21st century, Boys Town was home to over five hundred boys and girls who live in seventy family-style homes. Besides their schooling, these boys and girls receive heath care, including help for those with severe behavioral and emotional problems.

In 1977, the Boys Town National Research Hospital opened to provide clinical and surgical services to more than forty-thousand children and families across the United States.