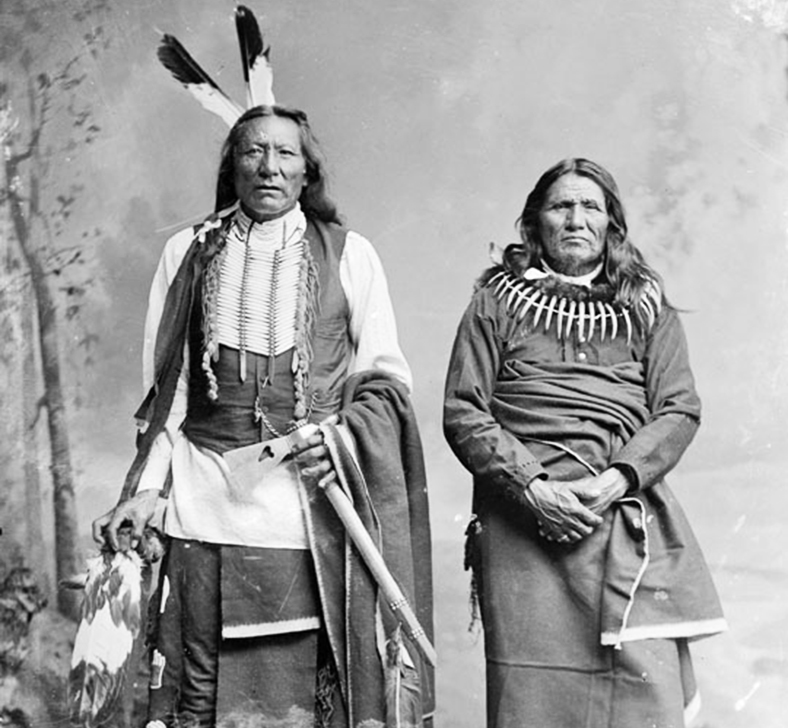 Standing Bear, Ma-chu-nah-zha in the language of his people, was born in 1829 in the valley near the confluence of the Niobrara and Missouri Rivers. He inherited the role of clan chief from his father.

The Bear clan, one of nine bands of the Ponca led by head chief, White Eagle, oversaw the social life of the tribe, as well as ceremonies and rituals. He was known for his strength of character and his eloquent speaking abilities.

The Ponca tribe’s removal to Indian Territory in 1877 was costly to Standing Bear. He lost his daughter, Prairie Flower, and an infant granddaughter along the way, and second daughter as well as his young son, Bear Shield, succumbed to fever after they arrived in the new land. The journey had been long and grueling, taking nearly two months during a rainy spring to travel the roughly six hundred miles between their home along the Niobrara and their temporary residence on the Quapaw Reservation in Indian Territory. Nine Poncas perished along the way, mostly women and young children. They faced torrential rainstorms that flooded rivers, streams, and roads, and their camp was even hit by a tornado outside Milford, Nebraska.

The removal journey was not the first time Standing Bear had visited Indian Territory. Months previous, he and the tribe’s other chiefs had agreed to evaluate potential reservation land in the territory, accompanied by an Indian Inspector, their Agent, and an Episcopalian missionary. After having visited the lands of the Osage and the Kaw, the chiefs decided the tribe could not thrive in such conditions, refused to view any more land. They insisted that they either be taken to Washington to explain to the President that they were unhappy with the land they had seen or be allowed to return home. When the Inspector refused to permit them to leave without completing the conditions of the trip, all but the two elderly chiefs set out for the Niobrara on foot. After nearly two months of walking through the snow and winds of a prairie winter, with little money and no food, the chiefs returned to their village to discover that the relocation of the tribe had been all but carried out while they had been journeying home.

Conditions were terrible for the Ponca in Indian Territory. The government had failed to make preparations for their arrival, and they had no lodging, clothing, food, or medicine. Their farming equipment had been left behind and no crops had been planting for their use. To make matters worse, the heat and humidity of the southern climate couple with the swampy landscape wreaked havoc on the health of the northern people. Fever, chills, and vomiting plagued the Ponca camp, and 158 of the 681 that had been removed to Indian Territory perished within the first two winters in their new home.

A few months after their arrival, Standing Bear and the other chiefs journeyed to Washington to present their plight to President Rutherford. B. Hayes, who told them to select a new piece of land and they would be provided with cattle, farming equipment, and material to build homes for themselves. The following summer, the Ponca relocated to the confluence of the Arkansas and Salt Fork Rivers. But the malarial conditions of their previous camp persisted, and during the winter of 1878, just after Christmas, Standing Bear’s son, Bear Shield, succumbed to illness. The boy’s dying request was that he be buried in his homeland along the Niobrara River.

Standing Bear would honor his son’s wishes. Just after the New Year in 1879, thirty Poncas departed in secret and began the long, frigid journey home. With only $20 and a small amount of food, Standing Bear crossed the frozen prairies of Kansas and Nebraska for the third time in two years. Upon reaching Nebraska, the Ponca took refuge with friends among the Omaha tribe, who gave them land and seed to plant. Within three weeks, news of Standing Bear’s departure from Indian Territory had reached officials in Washington, and soldiers arrived at the Ponca camp with orders to return them south. However, when the commanding officer saw the poor conditions of the Ponca, he could not bring himself to remove them in such a state, and decided to let Standing Bear speak with the military commander of the Department of the Platte, Brigadier General George R. Crook, at Fort Omaha. Crook sympathized with Standing Bear and his people, but was unable to do more than allow them a few days’ rest to prepare for their journey back to Indian Territory.

By this time, word of Standing Bear’s plight had reached the public, as assistant editor of the Omaha Daily Herald, Thomas H. Tibbles, roused public sympathy in his newspaper. Two local attorneys, John L. Webster and Andrew J. Poppleton, volunteered their services in an attempt to keep Standing Bear from being sent back to Indian Territory. They filed an application for a writ of habeas corpus in the U.S. District Court in Nebraska, where the judge would have to decide whether or not the government had the right to detain Standing Bear and force his return to Indian Territory. Judge Elmer S. Dundy granted the request for the writ, which had never before been filed for a Native American.

During the trial, the District Attorney argued on behalf of the government that an Indian was not a citizen, not a person, under the law, and therefore had no right to file suit in a federal court. After two days of testimony and argument, Standing Bear requested to address the court before it adjourned. In his memoirs, Tibbles recalled some of Standing Bear’s words: “That hand is not the color of yours,” Standing Bear said, holding out his right hand, “but if I pierce it, I shall feel pain. If you pierce your hand, you also feel pain. The blood that will flow from mine will be of the same color as yours. I am a man. The same God made us both.”

Ten days later, Judge Dundy delivered his decision to the Court, stating that “an Indian is a person within the meaning of the laws of the United States,” and that since Standing Bear had severed ties with his tribe (and had the right to do so), the United States military had no legal authority to arrest him or force him to return to Indian Territory. Standing Bear and the twenty-nine Ponca who had accompanied him were released from military custody.

For the next few years, Standing Bear set out on a lecture tour across the country, speaking out about the rights of Native Americans. He spent the remainder of his life on his farm along the banks of the Niobrara River, where he died in 1908.