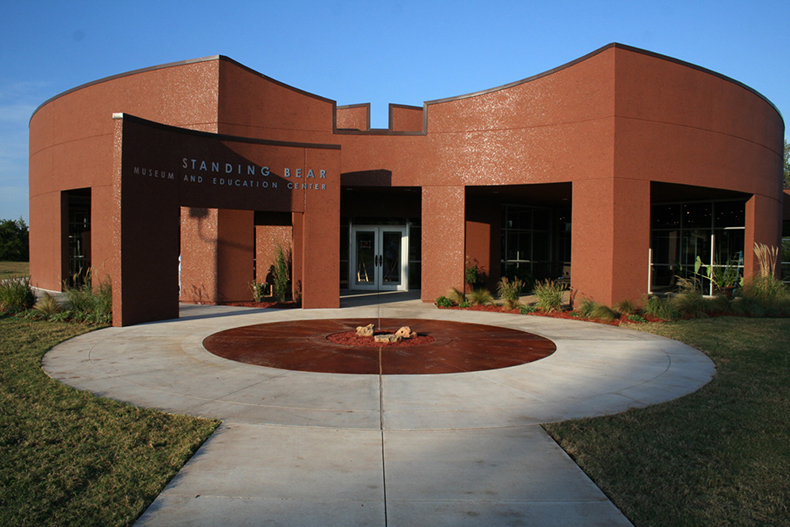 Their story transcends race, ethnicity, culture, and serves as a starting point to bringing about a greater understanding of tribal sovereignty, tribal rights, human rights and equality for all peoples.

The information presented about Chief Standing Bear along the trail serves as an excellent point of entry for engaging visitors in examining a variety of historical and legal lessons including the displacement of the Ponca tribe to Oklahoma, legal and ethical issues of equality and tribal sovereignty. Informational brochures and pamphlets direct local and regional travelers to a variety of trail locations where historic markers and additional educational materials are available.

Chief Standing Bear was born on the banks of the Niobrara River in Nebraska where the Ponca people peaceably lived. The Fort Laramie Treaty of 1868, in what the government later described as a “blunder,” gave away the Ponca homeland to their bitter enemies the Lakota. So, in 1877, Chief Standing Bear and the Ponca Tribe were forcibly removed from their homeland in Nebraska to Indian Territory in what is now Oklahoma.

The Ponca people walked over 500 miles from Nebraska to Oklahoma, enduring the hardships of travel, illness, and the conditions of Indian Territory.

Sadly, one-third of the Ponca Tribe perished during the first year, including Chief Standing Bear’s son, Bear Shield. His dying wish to his father was to be buried in his homelands along the Niobrara River. Determined to grant his son his dying wish, Chief Standing Bear led thirty members – nine men, ten women and eleven children – on the long 500-mile walk back to their home in Nebraska, only to be arrested just short of their homeland and imprisoned at Fort Omaha for leaving the reservation.

In May of 1879, with the help of local attorneys, Chief Standing Bear sued the federal government, seeking his freedom and right to return to his homeland. In his courtroom speech to the judge, Chief Standing Bear pleaded: “That hand is not the color of yours, but if I pierce it, I shall feel pain. If you pierce your hand, you also feel pain. The blood that will flow from mine will be of the same color as yours. I am a man. The same God made us both.” Chief Standing Bear emerged victorious ten days later when U.S. District Judge Elmer Dundy ruled, for the first time in American history, that Indians are “persons within the meaning of the law.”

This historic trail helps to increase the general public’s knowledge and awareness of the story of Chief Standing Bear, including his journey to Oklahoma and back and the historic 1879 “Standing Bear vs. Crook” court case in Omaha. It serves as a point of entry for engaging visitors in examining a variety of historical and legal lessons including the displacement of the Ponca Tribe to Oklahoma, legal and ethical issues of equality, and tribal sovereignty.

The trail runs from the site of the original Ponca reservation near Niobrara, Nebraska on the border with South Dakota and ends at Ponca City, Oklahoma with markers highlighting the various geographical and historical landmarks of significance along the way. Historians know of at least 20 Ponca campsites along the way because of the meticulous records kept by Indian Agent, Edwin A. Howard, along the journey. An interactive map of the Chief Standing Bear Trail links locations with some of Agent Howard’s detailed comments.