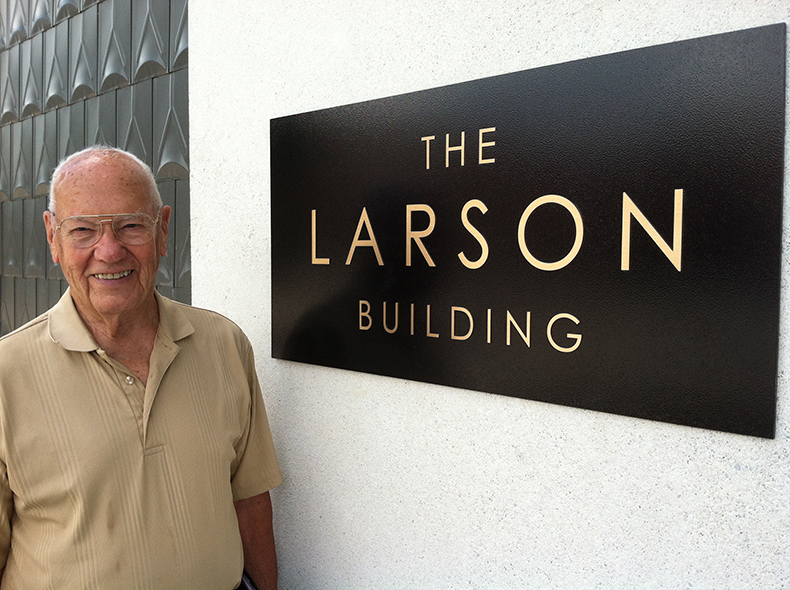 Roger Larson was born October 28, 1925, on a farm near Wausa, Nebraska to Ted and Alveda Larson, who were second generation Swedish immigrants. With a strong sense of duty to his country, Roger applied for and was accepted into the Air Force Cadet Program in 1943 and eventually attained the rank of Captain and the Honor of Group Bombardier-Navigator in the Twentieth Air Force.

After the war, Roger moved to Lincoln and graduated with a Bachelor’s degree in Business Administration from the University of Nebraska-Lincoln. During college, he met the love of his life, Shirley Laflin, and they married in 1950. They had three children, Ted, Tom and Susan.

Roger began his radio career in October of 1953 as an account executive for KFOR, then moved on to become General Manager and Vice President. For many years the citizens of Lincoln heard him end his radio editorials with, “I am Roger Larson, and that’s the way I see it.”

After his forty-year career with KFOR, Roger worked for NBC Bank, which became Wells Fargo. He spent his last four years working as a fundraising consultant for SLR Communications, with his daughter Susan. His work included promoting the Centennial Mall renovation and Spirit of Nebraska Pathway.

During his illustrious career, Roger received many honors including being inducted into the Nebraska Broadcasters Hall of Fame, the Roger T. Larson Community Builder Award, the Burnham Yates Outstanding Citizen Award from the Lincoln Chamber of Commerce, and the Broadcast Pioneer Award from the Nebraska Broadcasters Association and the University of Nebraska College of Journalism and Mass Communications. Roger served in leadership roles for more than forty organizations and raised millions of dollars for community projects. His attitude toward community involvement began with his Swedish family heritage. He simply believed it was his duty and responsibility to work to improve his community and society in general, and to make things better for future generations. In 2012, a new ten-story building at the corner of 13th and Q in downtown Lincoln was named the Larson Building in his honor.

His greatest joy, however, came from his roles as loving husband, father and grandfather, and he enjoyed a close relationship with every member of his family.

“Three things have been important in my life””my family, my work, and my civic duty. My fondest hope is that I will be remembered as someone who contributed to the general advancement of the quality of life in Lincoln, and a good example for my family and others to follow.” ””Roger T. Larson