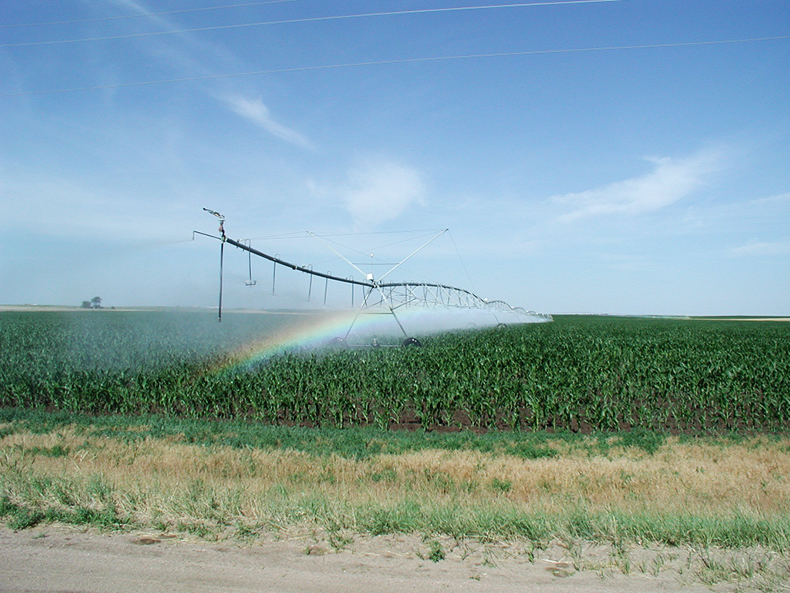 The Ogallala Aquifer contains about the same amount of water as Lake Huron, but it is not an underground lake. The Ogallala is composed primarily of loose, poorly sorted clay, silt, sand and gravel with groundwater filling the spaces between the grains below the water table.

The Ogallala ranges in thickness from less than one foot to thirteen-hundred feet from one place to another. The average depth is two hundred-feet, however, both the thickest and the most extensive areas are in Nebraska.

The sediments of the Ogallala formation date largely to the Pliocene and Miocene when the Great Plains were an inland sea and the Rocky Mountains were tectonically active, producing what became the Ogallala sediment. Sand, silt, coarse gravel and clay were deposited up to nine-hundred-feet deep in some areas, filling in valleys that had been eroded in Permian, Triassic, Jurassic and Cretaceous rock. Rocks beneath the Ogallala Aquifer are generally impermeable which acts as a seal that prevents water from moving into them.

In the Midwest, the Ogallala Aquifer is the single most important source of water in the High Plains region, providing nearly all the water for residential, industrial, and agricultural use. It stretches across all or portions of 8 states generally from north to south to include South Dakota, Nebraska, Wyoming, Colorado, Kansas, Oklahoma, New Mexico and Texas and lies under about 174,000 square miles of land. In 2009, the U.S. Geological Survey reported that the Ogallala Aquifer in the 8-state area of the Great Plains contained 2.9 billion acre-feet of water or 978 trillion gallons of fresh water. Approximately ninety-five percent of the water pumped from the Ogallala is for irrigation. Most of the water in the aquifer comes from precipitation on the High Plains.

Because of widespread irrigation, farming accounts for ninety-four percent of the groundwater use. Irrigated agriculture forms the base of the regional economy, including Nebraska. It supports nearly one-fifth of the wheat, corn, cotton, and cattle produced in the United States. Crops provide grains and hay for confined feeding of cattle and hogs and for dairies. The cattle feedlots support a large meatpacking industry. Without irrigation from the Ogallala Aquifer, there would be a much smaller regional population and far less economic activity.

Early settlers believed the water supply that lay beneath them was inexhaustible. In the 1930s, people had begun to realize the potential of the vast water supply that lay beneath them. Throughout the years, irrigation technology has evolved to allow agricultural producers to apply water much more efficiently without waste.The prospects for the future of the Ogallala Aquifer ultimately depend upon its management by each of its water users.