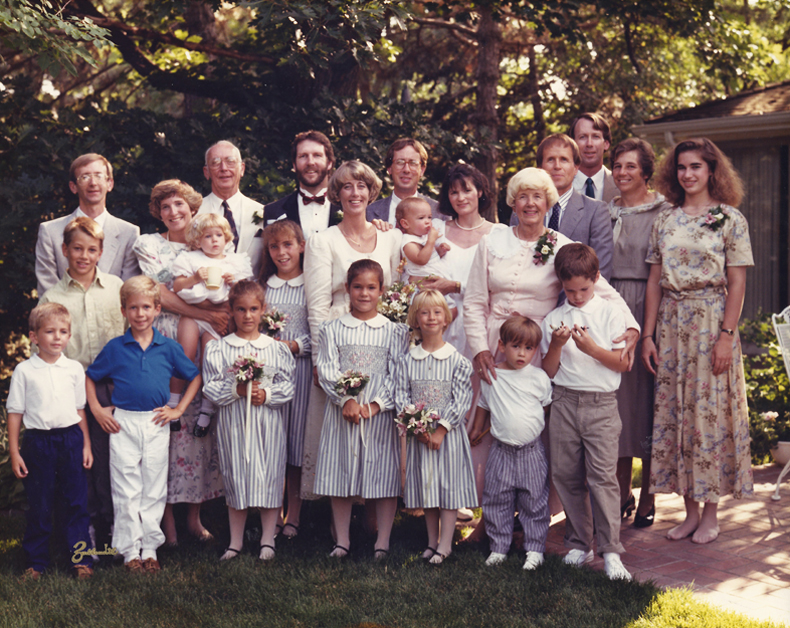 The two founding members of the Joe R. Seacrest Family were Joseph “Joe R.” (1920-1995) and Beatrice “Mike” (1920- ) Seacrest. Joe R. was a newspaper man in Lincoln and in four other Nebraska cities, North Platte, Scottsbluff, Lexington and Sidney. Members of the Seacrest Family owned and operated the Lincoln Journal newspaper from 1887 to 1995.

Mike Seacrest had two careers: One, a mother of five and a homemaker from 1945 to 1972; and two, a local TV “talk show hostess” from 1972 to 1985. Both Joe R. and Mike were actively involved in many civic, voluntary and charitable organizations in Lincoln and in Nebraska.

Joseph Rushton Seacrest was born in Lincoln in 1920. His parents were Joe W. and Alice Seacrest. His mother was the former Alice Louise Rushton of Omaha and her father was Joseph Rushton, who was one of the founders and later president of Fairmont Creamery Company in Nebraska. Joe R. was raised and received his elementary school and junior high school education in Denver and in Lincoln. Joe graduated from Phillips Exeter Academy in Exeter, New Hampshire in 1938. He received his undergraduate degree from Yale University in New Haven, Connecticut in 1942. Joe R. served the U. S. Navy in the submarine service during World War II from 1942 to 1945, and he achieved the rank of lieutenant senior grade upon his honorable discharge in 1945. Joe R. met his future wife in 1943, while both of them were serving in the Navy at the Philadelphia Navy Yard. He married Beatrice Hamilton Costello in 1944 in New Haven. Mike was born in 1920 in Bala-Cynwyd, Pennsylvania and her parents were Charles and Catherine Costello of Philadelphia. Her mother was the former Catherine Hamilton from New York and she was a direct descendant of Alexander Hamilton, who was the first Secretary of the Treasury of the United States. Mike received her elementary, junior high school and high school education in Philadelphia. She participated on the women’s varsity field hockey, soccer, basketball, tennis and lacrosse teams during her high school years. She received her undergraduate degree from Syracuse University in Syracuse, New York in 1942. She was part of the first Women’s Auxiliary Emergency Services (WAVES) officer class in the U. S. Navy in 1942. Mike served in the coding room of the Philadelphia Navy Yard from 1942 to 1944. She achieved the rank of lieutenant junior grade upon her honorable discharge in 1944.

Joe R., his father Joe W. and his brother James “Jim” Seacrest owned and operated four newspapers in Western Nebraska, the North Platte Telegraph, the Scottsbluff Star Herald, the Lexington Clipper-Herald and the Sidney Telegraph from 1946 to 2000 when they sold these four newspapers to the Omaha World -Herald. Members of the Joe R. Seacrest Family have lived in and worked in North Platte since 1968.


Information provided by Ted Seacrest, family historian, in May of 2014.