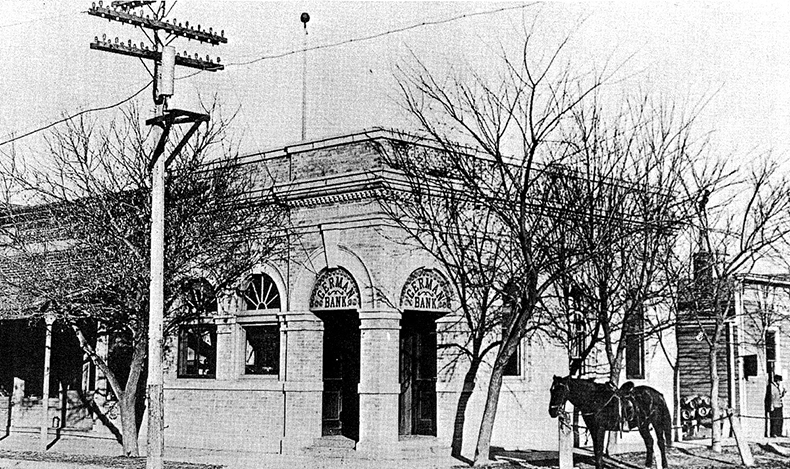 In 1887, the railroad route between Fairmont and Chester was staked out, and four individuals, Frank Bruning, Friedrich Bruning, Heinrichs Voss, and John Carroll, donated twenty acres for a new town site on that route.

The town was named Bruning in honor of the five Bruning brothers who helped establish it – Herman, Gerhardt, Friedrich, Wilhelm, and Frank. These five brothers and their families had emigrated from Germany and briefly lived in Illinois before settling in Thayer County.

Two of the five brothers, Frank and Friedrich, then played a role in founding what is now Bruning State Bank.The bank began in 1891 as the German Bank of Bruning. It changed names in 1918, survived the difficult 1920s and 30s, moved locations within Bruning several times, and has now added branch locations in Hebron, Broken Bow, and Holdrege. Like other multi-generation businesses and farms in the Bruning area, many of the bank’s current shareholders are fourth and fifth generation descendants of early stockholders.

Other notable moments in the history of Bruning… Today, Bruning is still located on an important transportation route – Highway 81, and its convenient location near the Thayer and Fillmore County lines is ideal for providing business and agricultural services to a large area. Similar to many small towns in Nebraska, agriculture is the foundation for the Bruning area economy and the backbone of Bruning State Bank. A national award named after Frank L. Bruning is given each year by the American Banking Association in honor of agricultural banking. A new Ag Banking & Finance degree was developed at the University of Nebraska, with the help of Fred D. Bruning, to help educate new ag bankers.

Through the years, Bruning family members have been strong supporters of not only agriculture and banking, but also community involvement in general. The town of Bruning is investing in its future to attract and retain the younger generations. A new medical clinic, library, fitness center, and fire hall are recent or planned projects of the Bruning Community Foundation. A favorite Bruning family quote guides their business philosophy and their philanthropy: “This Bank and Community are ours to use and grow, but it is our duty to leave them in better shape for the next generation.”

Information provided by representatives of Bruning State Bank, May 2014.