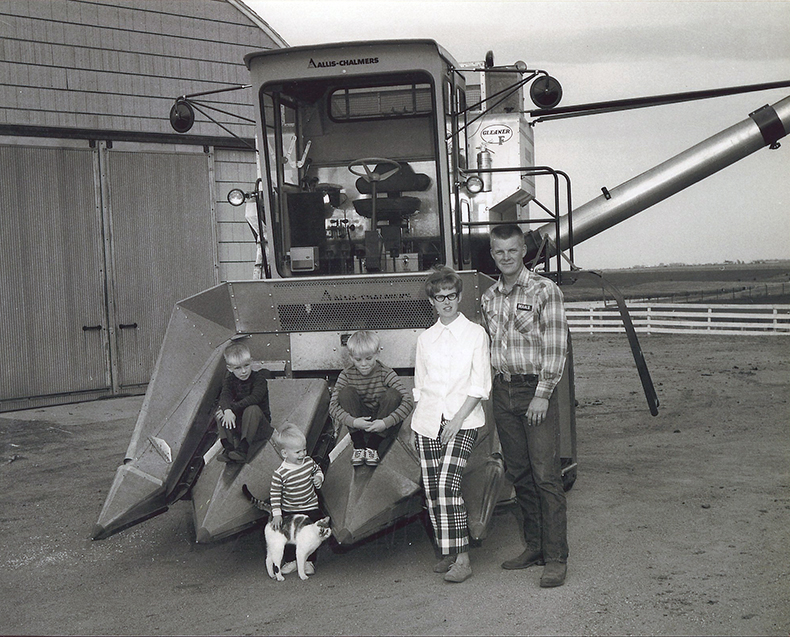 Jagels Farms, just outside of Davenport, Nebraska is a diversified operation which, in this century, includes irrigated white corn, yellow corn and soybeans; a cow/calf operation; custom feed cattle; and a trucking company.

Their success comes from hard work, ingenuity and five generations of Jagels men and their families. Work ethic and love of the land and of farming itself is passed from generation to generation but each generation brings new talents and fresh perspective.

In 1883, Dietrich and Anna Jagels emigrated from Hanover, Germany to the United States where they homesteaded a 160-acre plot which is still the center of the farm today. The first home they built was a sod house. Later, the sod home was replaced by a white frame house. And although the farm has seen many other changes, evolving and thriving from the use of new and improved methods and technologies, it has remained in the Jagels family for over 130 years.

Dietrich and Anna had three sons and two daughters. The youngest of the sons, Art, and his wife Hulda moved into the frame house with his parents in 1924. Art raised sorghum, corn and cattle and was selected as a Premier Seed Grower. He started irrigating in 1954. Art and Hulda raised two boys and two girls.

Their youngest son, Elliott, began farming with his father when more ground was purchased in 1960. In September of that same year, he married his wife, Eunice and they had three boys.

The family lost a great man when Art died suddenly in 1962 leaving a young Elliott at the helm. But Elliott had no problems stepping into that role.

In 1965, Elliott started using ridge till. Elliott raised hogs for a few years and the farm’s primary crop at that time was corn.

In 1970, Elliott and Eunice received the Nebraska and National Farm Bureau’s Young Farmer and Rancher Award.

The farmstead was upgraded again in 1973, when they built a brick, ranch-style home.

1974 saw the addition of the first pivot which was put up on the northeast quarter of the section. The irrigation system was enhanced in 1983, with the addition of scheduling/moisture blocks to monitor water usage.

Elliott and Eunice’s oldest son, Mark, joined the operation in 1984 when he returned home from the University of Nebraska-Lincoln where he earned a degree in Agricultural Economics. Soybeans were added to the farm when Mark returned.

Mark and Suzanne were married and moved to an acreage located one and a half miles east of the original homestead in 1985. Their family included three boys.

The farm continued to evolve with the start of no till farming in 2000 and in 2005, GPS/Auto steer was implemented.

In 2013, Mark and Suzanne’s youngest son, Jason, graduated from the University of Nebraska-Lincoln and returned to the farm. He became the fifth generation of Jagels men to join the farming operation where he will add his own contributions and carry on the tradition of leaving the land they farm in better shape than what he started with for future generations.

In addition to the contributions to their own legacy, the Jagels have a history of serving their state, their community and the profession of farming. Read more about Mark and his achievements and involvements.

Information provided by members of the Jagels family in June 2014.