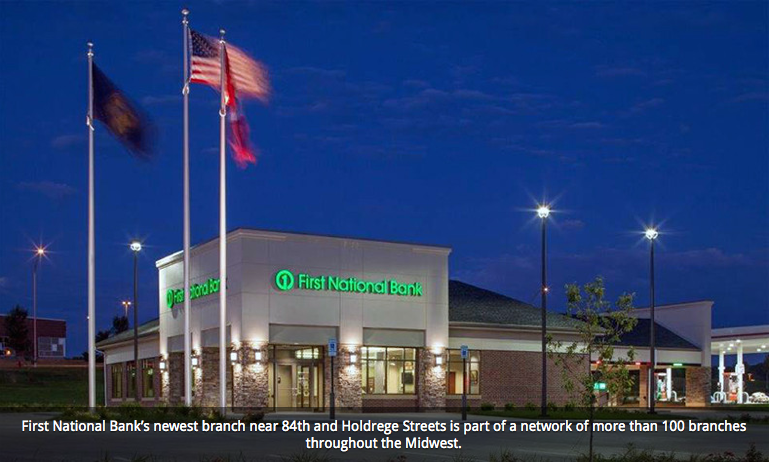 Since 1857, First National Bank has been dedicated to doing what’s right for our customers, employees, shareholders and the communities we serve.

The First National Tower, the bank’s corporate headquarters in the heart of downtown Omaha, stands 633 feet and more than forty stories high, making it the tallest building between Chicago and Denver.

First National Bank’s beginnings were much more modest. Founded by brothers Herman and Augustus Kountze, the bank opened for business when Omaha was barely a village and Nebraska had yet to become a state. The Kountze Brothers Bank’s first office was a small wooden building, close to the banks of the Missouri River, where they traded in gold dust and buffalo hides.

From its humble start, First National’s holding company has grown into the largest privately owned banking company in the United States. Now in its sixth generation of family ownership, the organization has 5,000 employee associates and assets of $18 billion.

The Bank’s success has been marked by staying ahead of the curve. First National was one of the first banks to issue credit cards in 1953.


Today, First National is one of only three banks in the United State to issue all four credit card networks (Visa, MasterCard, American Express and Discover), and ranks as a top agricultural bank lender and one of the leading providers of project finance to the ethanol industry.

First National of Nebraska has been named one of Forbes’ Best Banks in America. The company has also received the Well Workplace Platinum Award from the Wellness Councils of America; been designated a Fit Friendly Company by the American Heart Association; and received the Governor’s Excellence in Wellness Award.


Being a good corporate citizen means enriching the lives of our communities by sponsoring a wide range of events, teams, and organizations across the state, including serving as “The Bank of Husker Nation.”

Information provided by a representative of First National Bank in June 2014.